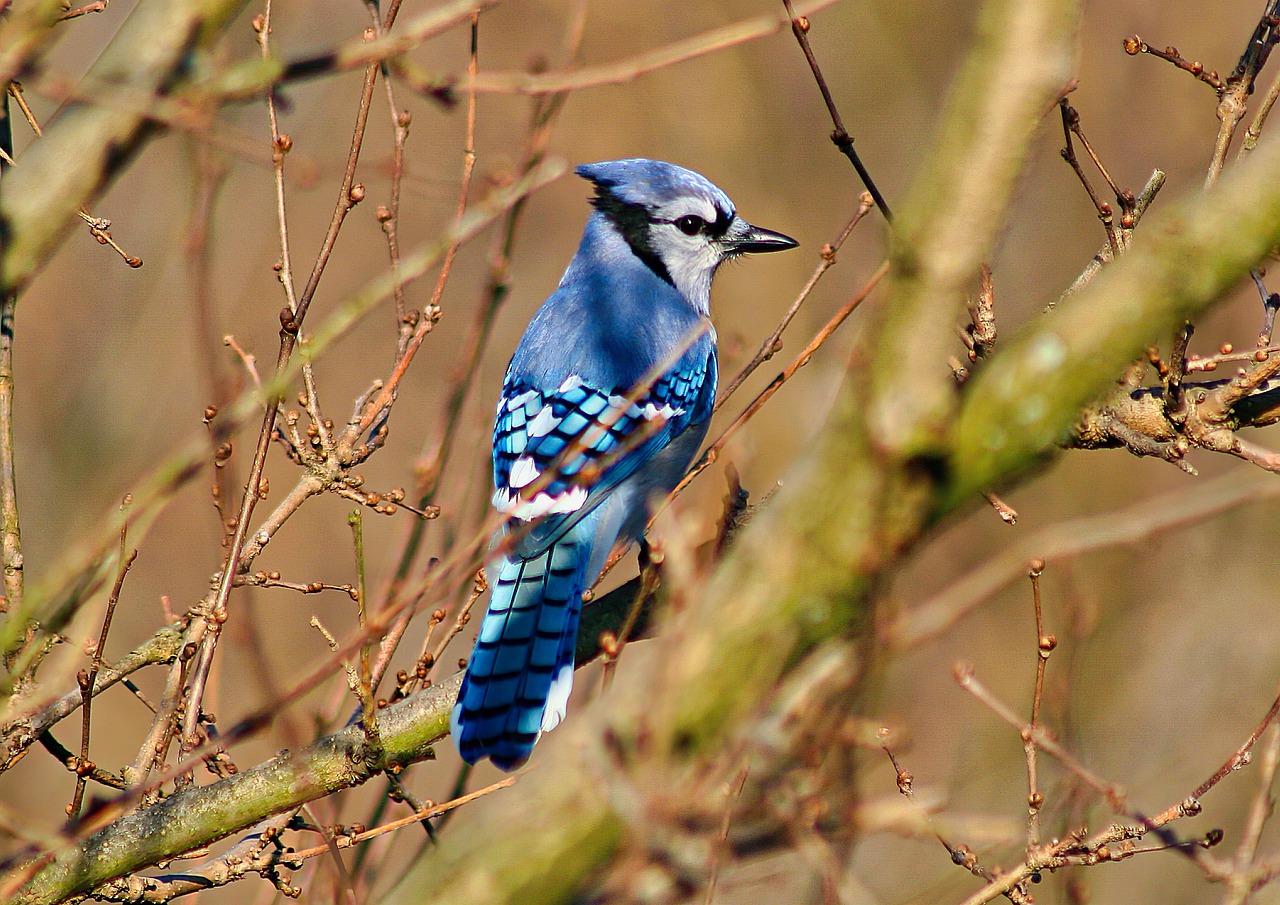 Looking for a handful of quick Blue Jay facts? I wanted to put together a short post together for one of my favorite birds at my feeders. I think Blue Jays get a lot of undeserved flack. There’s a perception that Blue Jays bully other birds, steal their eggs and are aggressive overall. This viewpoint is overblown.

Blue Jays are larger and louder songbirds and can clear away birds from feeders occasionally, but other birds like Red-Bellied Woodpeckers and Grackles actually bully Blue Jays at feeders in terms of hierarchy. It’s also been shown that gray squirrels will also prevent Blue Jays from feeding.

Blue Jays rarely eat eggs of other birds. A study of Blue Jay eating habits found that 1% of Jays had evidence of eggs in their stomachs. They primarily eat what other songbirds eat, insects and seeds!

As you’ll see in one of the facts below, Blue Jays are actually dedicated parents and can bring a lot of fun and unique personality to your yard. Read on for more facts on this intelligent and fascinating bird!

Blue Jay Facts #1. They Hide and Store Food for Later

Blue Jays engage in a behavior called “caching“. They will grab food and hide it in various locations, sometimes burying it or hiding it in crevices of trees. This is fun to watch as a bird feeder. I see Blue Jays fly off with peanuts or sunflower seeds (their favorite feeder foods), dig them into the ground, and cover the spot with leaves. Blue Jays can remember the locations of dozens of caches. How they do so is a mystery, but it’s safe to say that they’re intelligent birds with impressive memories.

One of the best parts of Blue Jays is that they bring striking blue color to your yard and feeders.

However, Blue Jay feathers aren’t blue! They’re a drab brown-gray. We see them as blue because of light scattering – the reflection of light off their feathers from the sun.

The color blue is uncommon in nature. Any blue bird you see (Eastern Bluebirds, Indigo Bunting, etc.) is also not blue, it’s just an optical illusion trick right in nature.

Blue Jay Fact #3. They Have a Throat Pouch to Store Food In

Getting back to Blue Jay caching…part of what makes them great storers of food is that they can hold multiple seeds at once in a throat pouch called the gular pouch. They can store up to five acorns at once in their throat.

This is a funny sight at feeders. You’ll see a Blue Jay stuff as many peanuts as it can into its throat before it flies away to store some of the food for later.

That’s efficient eating! I wish I could do this, but I’d also rather not receive a lifetime ban from buffets.

The reason why isn’t certain. Some hypothesize that jays do it simply for territorial defense and to clear spaces of other birds when they want to feed. Others claim it helps jays stand out during mate selection…or that they simply enjoy copying other sounds they hear.

Anecdotally speaking…I swear that I saw a Blue Jay mimic a dog barking at my feeders one time before grabbing a peanut. It worked – all the other birds at my feeder scattered.

Blue Jays tend to be monogamous and mate for life. During nesting season the male Blue Jay will devotedly feed the female, who stays on the nest during the weeks-long process.

When their babies hatch, Blue Jay families also tend to stick together for much of the remainder of the year. Most birds don’t do this! Blue Jays show a devotion to their kids that’s rare in the bird world.

Blue Jays can be aggressive, but it’s fun to know that they’re dedicated parents.

Disclaimer: Some links found on this page are Amazon affiliate links. If you click an affiliate link and make a purchase, I might earn a commission. As an Amazon Associate I earn from qualifying purchases. (There’s no extra cost to you if you do this).