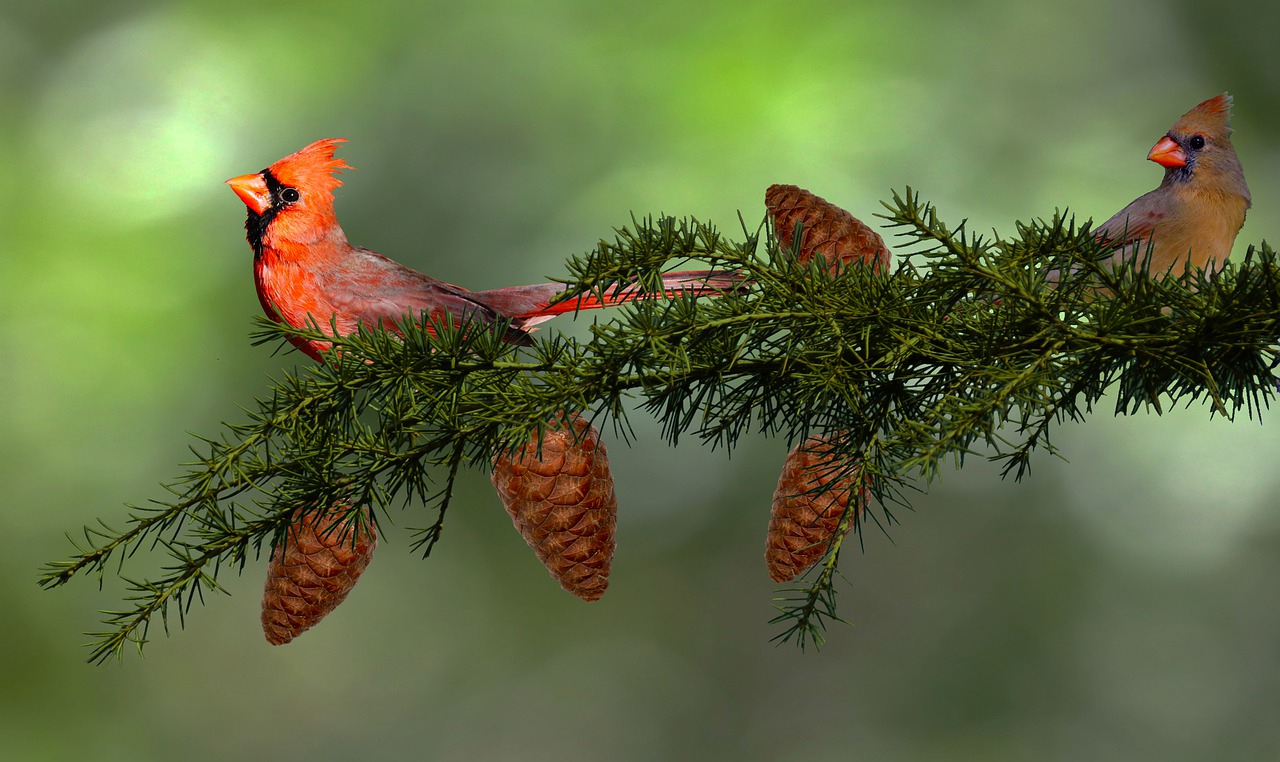 Looking for some Cardinal facts to drop at your next bird trivia gathering? (That’s a thing…right?). You’ve come to the right place!

Northern Cardinals are one of the most beloved birds in the United States and there are plenty of facts to back that up. Read on for some unique facts on this beautiful bird!

Related: 5 Proven Ways to Attract Cardinals to a Feeder

Cardinal Facts #1: Cardinals are Monogamous (…Usually) and Mate For Life

Cardinals make for picturesque couples. What’s even better? Northern Cardinals are usually monogamous and mate for life. That Cardinal couple you see outside of your kitchen window very well could be the same pair every single year!

Cardinals Facts #2: …But They Do Cheat Sometimes

Okay…time for me to throw some cold water on Cardinal romance: Cardinals are USUALLY monogamous, but that isn’t always the case. Sometimes males will breed with multiple females. One study on breeding cardinals found that 9% to 35% of Cardinal nestlings were due to “extra-pair copulations.”

Sounds like a bird soap opera waiting to happen. Hopefully Netflix can make this happen soon.

It’s worth pointing out that this frisky behavior happens among most birds. Outside of a handful of species, very few birds are completely faithful to one mate their entire life.

Alright, back to pleasant facts! Male Cardinals showcase they will be good providers for their offspring by bringing food to a female and feeding it to her beak-to-beak. Female Cardinals spend most of their time at the nest when she lays eggs. This display indicates that a male will be able to bring food to the female, giving their offspring a better chance at survival.

One of my all-time favorite sights at my bird feeder is seeing a male Cardinal snag a sunflower seed and feed it to accompanying female. It’s amazing to watch!

Related Content: How to Attract 29+ Minnesota Birds to Your Feeders (With Photos)

Cardinal Fact #4. They Can Live to be 15-Years-Old

The oldest banded Northern Cardinal in the wild was a female that lived to more than 15-years-old. Their average lifespan in the wild is between 3-4 years.

There are also rumors of a 28.5-year-old Cardinal that was held in captivity, but I can’t find a source I trust to back this claim.

Cardinals are expanding their range, and it may be due to backyard bird feeders! In the past 30 years, Cardinals have arrived in more northern-Minnesota, Maine and southern Canada.

Unlike many other birds, Cardinals don’t move to different regions for the winter or summer. In fact, most stay within one mile of where they were hatched! If you have Cardinals in your neighborhood or at your bird feeder, chances are that they will stick around the entire year!

Cardinal Fact #7. Not all Northern Cardinals Look the Same

Did you know a Cardinal will look slightly different across different sections of the country? There are 19 Cardinal subspecies. A lot of their variation is based on their size and the color of the female face masks. Cardinals in the south and central part of their range are also brighter compared to cardinals on the east coast.

There was even a proposal in 2014 to split Northern Cardinals into six species. It was voted down.

Cardinal Fact #8. They Will Attack Their Own Reflections

Cardinals are territorial birds during the spring and summer during mating season. They’re so territorial that they’ll spend a long time fighting their own reflections on windows or car mirrors, thinking it’s another male Cardinal intruding on their turf.

To prevent Cardinals from doing this, you can buy and hang specialized birding window decals to deter reflections.

Cardinal Fact #10. They Get their Names from…Cardinals!

I honestly used to think it was the other way around, but Cardinals got their name from the distinguished Catholic bishops by American colonists. The “Northern” part of their name comes from their ever-expanding range up north!

Source: Dictionary of Birds of the United States: Scientific and Common Names

Cardinal Fact #11. Their Feathers Are Red Due to Their Diet

Cardinals get their red color from a diet rich in carotenoids from native fruits like wild berries.

Once in a blue moon, Cardinal males will be bright yellow. This is believed to be due to a genetic mutation that turns the pigments Cardinals get from food into a yellow instead of red.

Cardinal Fact #13. A Group of Cardinals Are Called a College, Conclave, Radiance, or a Vatican

Cardinals usually stick to eating fruits and seeds like sunflower, but they also eat insects and snails. They feed nestlings a diet almost completely made up of insects like spiders and mosquitoes (as if we needed another reason to love these birds).

While going through their annual molting of feathers, some Cardinals go partially or completely bald (making them look vulture-like). If you see this happening, don’t worry…The feathers grow back within a few weeks!

Cardinal Fact #16. You Can Find Them in Hawaii…and Bermuda!

Cardinals are common across much of the United States and Mexico, but did you know you can also spot them in tropical Hawaii and Bermuda?

Cardinals were introduced to Hawaii in 1929 when a male escaped its cage in the capital of Honolulu. Eventually, its female companion was also released. Over the next couple of years more than 300 additional Cardinals were released on the islands. They are now common throughout the state.

Cardinal Fact #17. They May Protect Humans from West Nile Virus

Another fact giving you more reason to love Cardinals! Researchers several years ago decided to study Cardinals and their relation to the West Nile virus in the United States. They found that even though Cardinals can be infected by the West Nile Virus, their bodies suppress the virus to the point that they’re much less likely to spread it back to mosquitoes.

Most female songbird species don’t sing at all. But a female Northern Cardinal does! She will often sing when she’s on her nest to communicate with her mate and signal where she is so he can deliver food. A mated pair of Cardinals share their own song phrases!

The population of Northern Cardinals has been steady in the last several decades. They’re adaptable to human development and may even benefit from it (especially when bird feeders are placed outside of homes). They are protected by the Migratory Bird Treaty Act of 1918, making it illegal to kill, capture, sell, trade, or transport Cardinals (along with other native birds).

Cardinal Fact #20. Cardinals Flock Together During the Winter

As noted earlier, male Northern Cardinals are territorial during the mating season. But they calm down in the winter and will often flock with a group of Cardinals. This leads to an amazing colorful sight in the drab winter: More than a dozen bright-red Cardinals hanging out in a tree or patch of forest together. Christmas card material for sure!

Want to draw this beautiful bird into your yard? Put some black oil sunflower seed out on the ground or in a sturdy bird feeder! That’s all you really need to do. Cardinals are common feeder birds across their range. They quickly became my favorite visiting birds at my feeding station!

The Arizona Cardinals in the NFL and St. Louis Cardinals in MLB both have the bright red bird as their mascot. Cardinals are also the mascot for college teams like Illinois State University, University of Louisville, North Idaho College, Saint John Fisher College, and many others.

Disclaimer: A link found on this page is an Amazon affiliate link. If you click an affiliate link and make a purchase, I might earn a commission. As an Amazon Associate I earn from qualifying purchases. (There’s no extra cost to you if you do this).